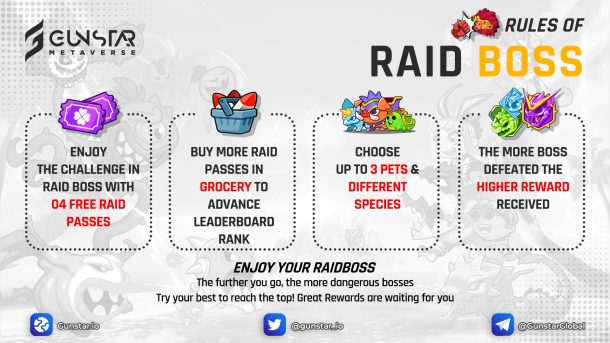 To win and earn rewards in Raid Boss mode, besides training your skill to the higher levels is needed but also you must know the rules.

Let’s over through important rules:

The users must use the Raid Pass to join in the Raid Boss, each Raid Pass will give us the permission to join in one Raid Boss raid. Each event will be available in 24 hours, and each player will be given 2 Raid Passes per event. If players own more than 1 Raid Pass (from the previous event or buy from Grocery), then the free ones won’t be added. In case you want to fight with Raid Boss more than 4 times, you can use $GSC to buy more $Rune coins and use it to buy more Raid Passes at Grocery (In-game shop). Please balance the number of Raid Pass to use because excess tickets will be canceled and not accumulated for the next event. Spending Raid Passes also required a smart strategy.

Another interesting thing is that our gunners won’t have to spend their energy to participate in Raid Boss. Therefore, you can constantly join in the Raid Boss as long as your summoned beasts have enough health points (HP). Use the healing item or save your pets’ health points because they can’t self-heal after each match in the Raid Boss mode.

After finishing a Boss, players will have the right to choose a buff for their summoned beasts (Damage, Heath points, Defense,…) – this is the random reward when completing a round and only be applied in the next turn. Holding the most suitable strategy, causing as much damage, and defeating bosses as much as possible will increase your rank compared to others, which means you will have a higher chance to get your hand on the rewards.