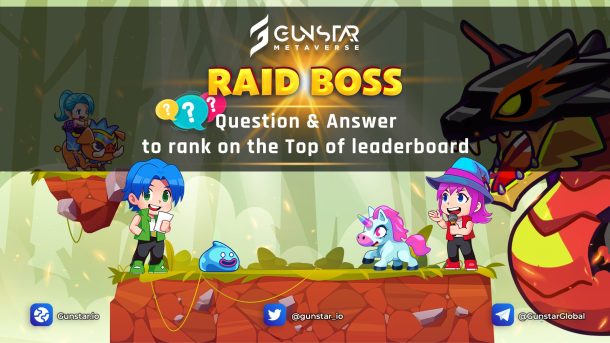 So we have been together through the first phase of the Raid Boss on 27/04. Here is the important information for those who participate in the upcoming Raid Boss.

1. If you need to know more about Raid Boss?

The special event is held every week in Gunstar Metaverse. The players can get amazing rewards, Pet fragments through defeating bosses.

For more information, please refer to the following article: https://docs.gunstar.io/whitepaper/the-game/game-modes/raid-boss

2. What is Pet Fragment? And how to get them?

Pet Fragments are soul fragments that are absorbed after defeating the BOSS in StarWorld. These segments are divided into ranks corresponding to Normal, Rare or Elite.

To be able to own Pet Fragment, players need to participate in Raid Boss event

Pet Fragment has been used

3. How many Pet Fragments to combine into one complete pet?

After participating in the Raid Boss event. Players can receive reward boxes to open for Pet Fragments. When collecting all the fragments can combine into one pet.

Details will be updated at project’s whitepaper: https://docs.gunstar.io/whitepaper/the-game/game-play/nft-pet-system/pet-merging

4. How to improve your achievements in Raid Boss?

In each and every war, Having the appropriate skills, technique & strategies will help you get the best achievements. And beside the above factors, we will also need these following tips to improve your personal achievements in the Raid Boss mode:

5. How to optimize your Raid Passes: